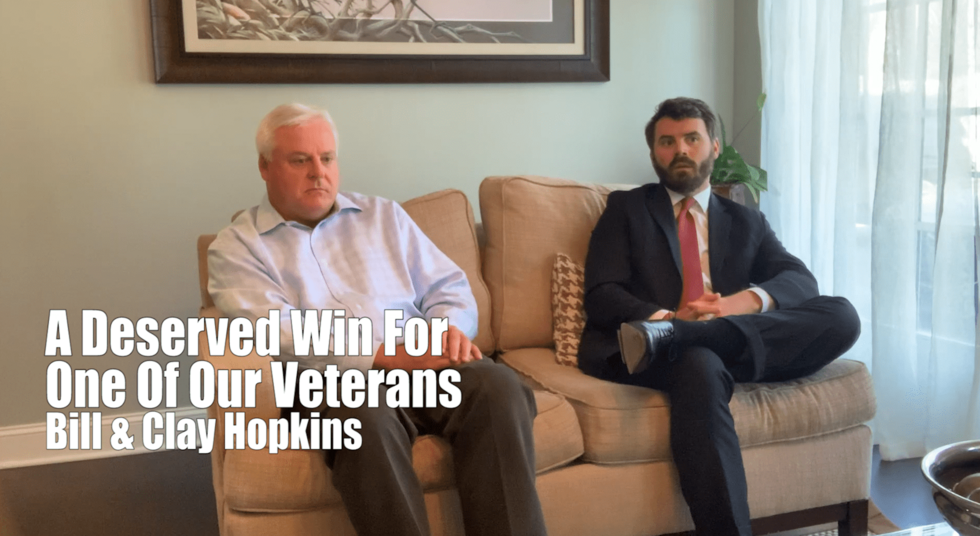 Whitney M. : All right, so Clay, you've recently been working on a case with Curtis Darnell, I believe.

Clay Hopkins: Yeah, actually Mr. Darnell is a former US Air Force Veteran. He survived in the Air Force for eight years. He was stationed all around the world. He was actually a munition specialist in the Gulf War and over in Iraq when that was going on. And unfortunately, while he was in the service, he suffered some PTSD, migraine headaches, and while he was stationed in the Myrtle Beach Air Force Base, his last station, worked with a chemical called Trichlorethylene. Which is a very well known cariogenic. And ultimately, he developed bladder cancer.

We alleged that was because of his exposure to TCE. It was well-documented exposure to that. In fact, there are some special oncologists around the world who have studied this and found that TCE specifically causes bladder cancer. Not lung cancer, brain cancer, or pancreatic cancer, but specifically bladder cancer. Which Mr. Darnell ultimately developed and suffered from.

So, Mr. Darnell, actually in 2015 on his own, applied for benefits through the VA. Which, you as a former Veteran or a Veteran, can apply for if you suffer a service-connected injury. You have to show that the injury that you suffered from or that you have is service-connected. That is that you either suffered it while you were in the service. Or that the onset of it began or happened while you were still in the service.

So, a lot of benefits are denied for Veterans because of that. They ultimately develop something later on down the road. They believe it might have been caused when they were in the service. But they didn't go see the medic or didn't go get the required, you know, doctor visits while they were in the service. And they were denied for that reason. Ultimately though, Mr. Darnell had really good records from when he was in the service and was at the Myrtle Beach Air Force base. And he had really good records of the chemicals that he was dealing without there.

I met him in 2015. He had been denied for benefits. We appealed that decision. In 2016, we received a letter from the VA that said that they acknowledge that he worked with TCE. And acknowledged that he had bladder cancer. But they did not acknowledge that they used TCE at the Myrtle Beach Air Force base. Which was really odd. It was a really unfair decision. And we decided to appeal it.

Unfortunately, we are doing a great disservice to our Veterans. The average appeal time for a claim and a benefit decision letter or a benefit approval letter for a Veteran right now is 1,700 days. Almost five years for Veteran's to find out whether or not they are going to receive benefits. And obviously, some of them that do suffer cancer and other diseases like that, pass away in that time.

Whitney M. : They don't have the time.

Clay Hopkins: That's right. But Mr. Darnell received some radiation treatment. He was in remission. We ultimately got a hearing in front of the Board of Veteran's Board of Appeals which is based out of Virginia. And we submitted some documentation. We got Mr. Darnell to Duke. And got some documentation on it, the connection between TCE and bladder cancer, and really put a lot of evidence in about what sort of exposure that he had with TCE at the air force base. We really wanted to make a clear record of the exposure there so that the VA would stop having this decision, stop denying that it was in use there, and that there was exposure to it there.

And just last week, actually, almost five years I met Mr. Darnell, almost six years after he filed his initial claim. We got a decision letter and he was awarded almost a $130,000 in back benefits. Which is a very, very significant award.

Clay Hopkins: And he is entitled to a little over $3,000 a month going forward. Which we obviously really helped Mr. Darnell. And helped him get some of those medical treatments that he is entitled to as a Veteran for the service that he provided for our country.

Clay Hopkins: Definitely. Extremely happy for him. It's one of the great stories. We normally do not have clients that we have for five years or cases that are going on for five years. But unfortunately, that is part of the system there. There is a tremendous backlog of cases. It was a really great win for our client and for someone that absolutely deserves.