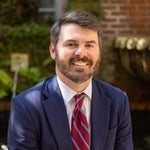 A Little About Clay

Clay is a second generation lawyer and grew up in the Midlands of South Carolina in Columbia and Camden, South Carolina. The Hopkins Law Firm is centered on the values engrained in him at an early age: principled, practical, and personal.

Clay is a 2011 graduate of Clemson Unviersity. He received his Bachelor of Science in Bioenginerng, with a minor in Political Science, graduating with honors. Prior to attending law school, Clay worked in Pensacola, Florida for a short time in the biotech manufacturing industry.

Clay attended law school at the University of Alabama School of Law. While a law student, Clay was inducted in to the Bench and Bar Legal Honor Society and was the Executive Editor of the Journal of the Legal Profession. In addition, Clay was a recipient of the Dean's Community Service Award and participated in the Civil Law Clinic, where he tried a civil case under supervision from the clinic director and gained a wide range of legal experiences. He also interned for the Honorable Virginia Emerson Hopkins and the Honorable Karon O. Bowdre, both Federal judges for the Northern District of Alabama.

Clay enjoys being based out of Charleston but still maintains strong ties to his local community in the Midlands where he currently serves as co-counsel in many cases. Clay has represented a diverse group of South Carolinians in venues throughout the state and seeks justice relentlessly on their behalf.

Clay was formerly on the Board of Directors for the Georgetown County Chamber of Commerce and has continued to volunteer his time in his local community. Clay lives on Johns Island with his wife, Laney, and their daughter, Cricket.

The University of Alabama School of Law, Tuscaloosa, Alabama